To review making the petticoat I thought it might be helpful to summarize the dimensions and amount of fabric used. The yardage used is approximate.

The Casa Organza fabric was purchased online at Joann+ for $1.27 per yard. (40 yards had to be purchased to get this price.)

Amount of fabric used: about 7 yards

Ruffle: Cut 12 Rectangles, 13in  x Width of Fabric. One rectangle used per ruffle.

Ruffle: Cut 12 Rectangles, 13in  x Width of Fabric. One and a half rectangles used per ruffle

Ruffle: Cut 18 Rectangles, 13in  x Width of Fabric. One and a half rectangles used per ruffle.

Ruffle: Cut 9 Rectangles, 16 in  x Width of Fabric. One and a half rectangles used per ruffle.

Godets placed on back and sides only.

The petticoat layers are finished! Hooray! Now to finish off the petticoat, it needs a waistband.

I then cut a 4 inch by width of fabric rectangle from the organza.

Next I folded it in half creating a 4 x 30 inch rectangle and serged the edges. Since I needed a 29 inch waistband, this worked perfectly for me. 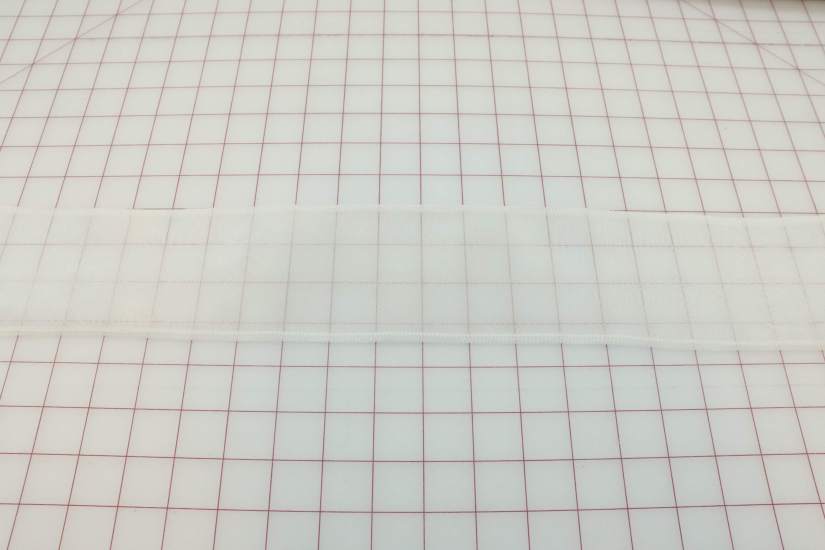 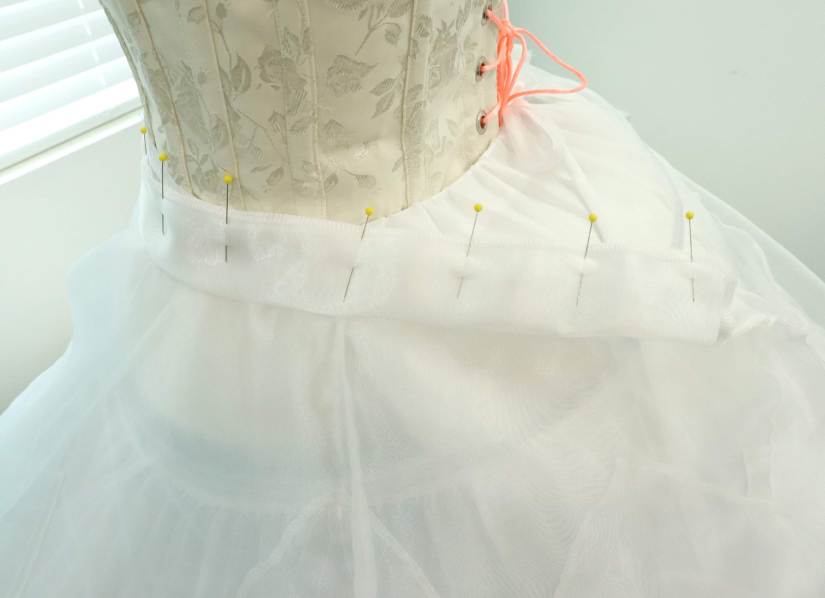 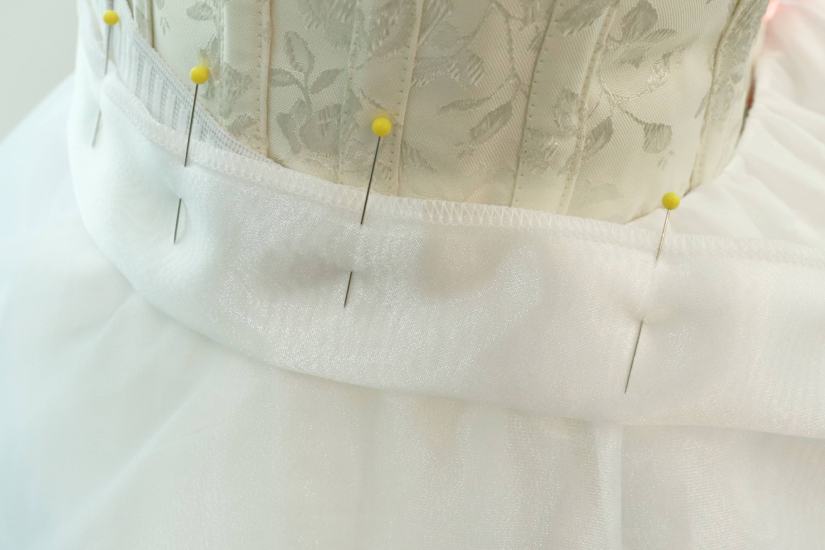 Using the same method I used for the bustle, I created an elastic waistband and slid it through the channel. I probably could have made the waistband channel a bit narrower, but overall I was happy with it. The elastic slid in easily, and it lays well.

Having the waistband attached finally finishes the petticoat! Huzzah!

I definitely like the shape after adding Layer 4.5 with the back godets. 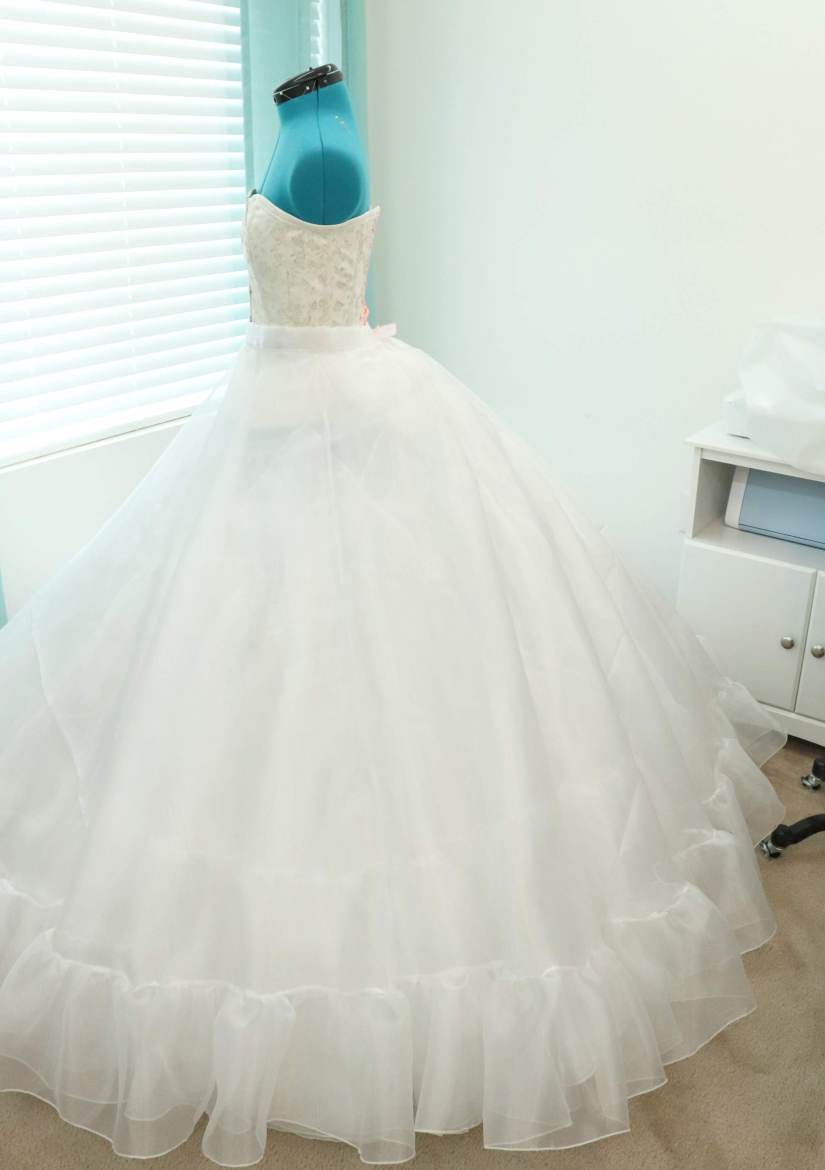 The petticoat is done! I love it!!!

After staring at my petticoat for quite some time I felt like it was still a bit unbalanced. This probably could have been avoided if I had made the hoop myself, but since I chose not to, I felt like this was something I needed to correct.

I wanted the back side of the petticoat to be fuller. So, I decided to add some additional godets. I am calling this layer 4.5. I removed the ruffled circle skirt and went back to the drawing board.

Since I wanted to add fullness to the back and sides, but not the front, I decided not to have the godets go all of the way around.

I cut 6 more godets. The triangular sections had a radius of 29 inches. For the ruffles I cut 9 rectangles that were 16 inches by the width of the fabric. One and a half rectangles were sewn together to create a 90 inch ruffle for the bottom of each godet. This required an additional 7 yards of fabric.

Instead of creating a loop with the godets, I left one of the seam open creating a long chain rather than a ring. Centering the godets on the back of the petticoat, 3 on the left, 3 on the right. I attached them above layer 4. I then hand stitched the sides in place connecting this new layer to layer 4 so they would stay in place. 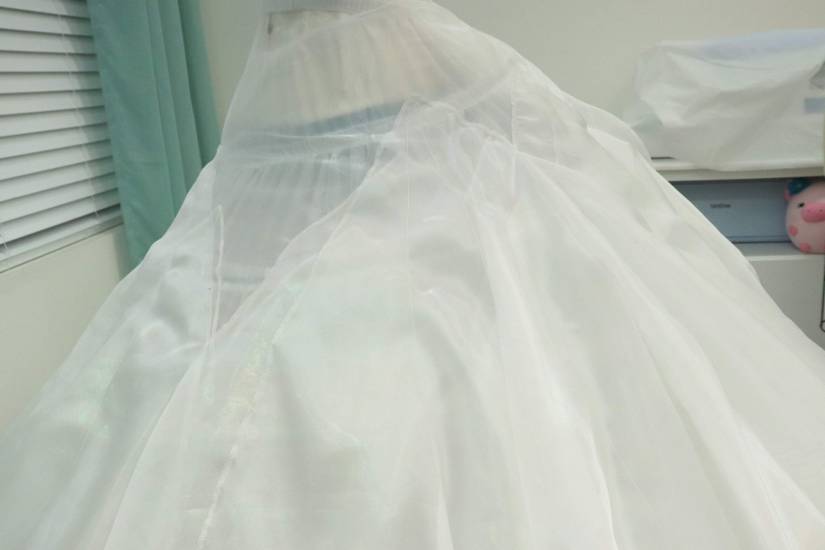 Once the new set of godets were in place I put the ruffled circle skirt layer back on. The result was not perfect, but I was much happier with the overall shape.

Yes! This is what I was going for!

The lesson I learned…don’t be afraid to change your mind along the way, or to go back and fix your mistakes. You will be a lot happier with the result if you do!

Here it is! The next step to the Belle/Cinderella cosplay tutorial. We are on layer 5 of the petticoat. This layer is constructed differently than the previous layers.

Here was the petticoat after Layer 4.

Layer 5 is a simple circle skirt with a ruffled bottom. Based on the shape of the petticoat to this point I decided I didn’t want the ruffle to be the same length as the previous as it was starting to develop a “ledge” where the line of the skirt would angle down when it reached the ruffle. To compensate for that I decided to make the Layer 5 ruffle 9″ tall instead of 12″.

Reader beware! The next section is riddled with math! I actually love this. I teach math, so I think it is just fabulous when I can incorporate math into my projects. Don’t worry, I will keep it as simple as possible and try to make the calculations clear. If you are working on your own project, you may want a calculator handy as you do these steps. 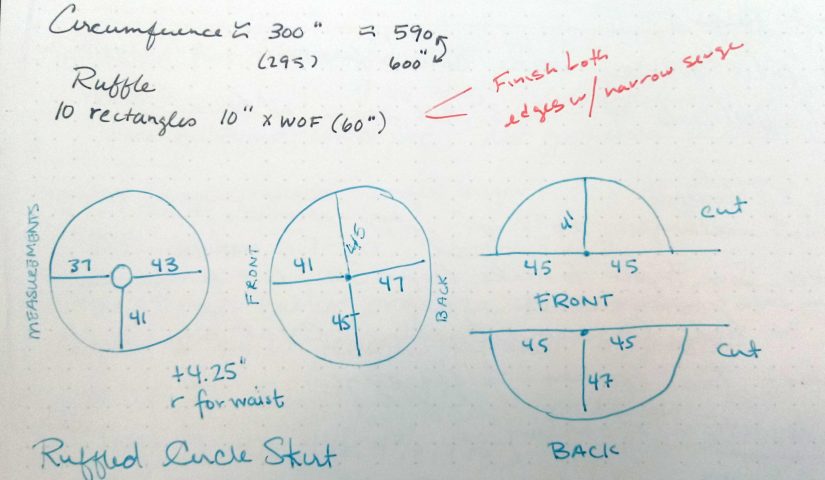 I added this length to the measurements needed for the skirt to create my cut pattern.

The largest radius used in my pattern was 47 inches. I used this radius to determine the length of ruffles needed. Circumference = 6.28 x Radius. Plugging in 47 inches for the radius I was able to determine that the circumference of the circle is approximately 300 inches. I doubled this for my ruffle. So, I needed 600 inches of ruffles for this layer of the petticoat. This actually worked out perfectly as the organza I used is 60 inches wide.

I cut ten 10″ strips that were the length of the fabric (60 inches) and sewed them together along the short edge. I finished both edges of the ruffle (hem and opposite side) using a narrow hem on my serger. I finished the non-hem edge to help prevent fraying as I worked with the gathers. I am very glad I did!

I made a gather stitch along the top edge of the ruffles. Don’t you just love all the fluff! 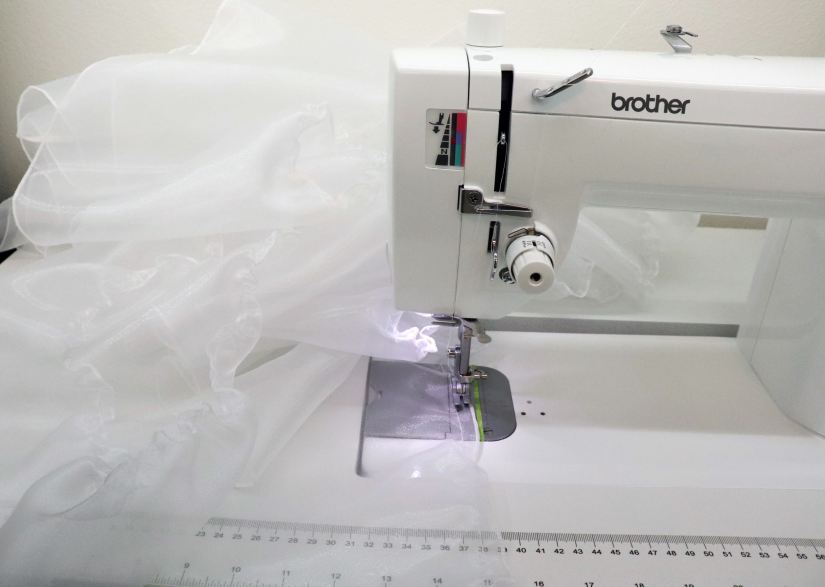 The organza was not wide enough to cut the whole circle skirt, so I cut it in two sections, front and back.

Using 100 inches of organza fabric, I folded it width wise so I had a double layer of fabric that was 60 inches by approximately 50 inches. Laying the fabric flat, and pinning the edges to hold it together, I drew out the circular shapes from my sketches in the same manner that I drew out the curved sections of the godets. I also drew out the circle for the waist and cut them out. 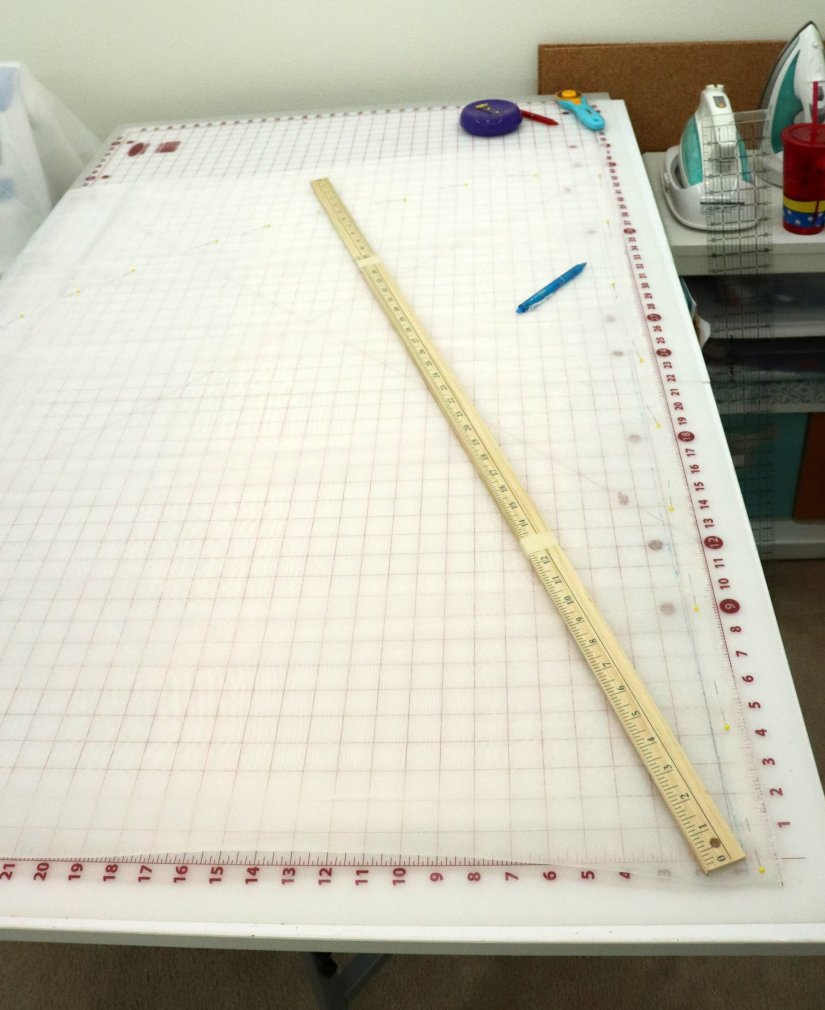 My yard stick wasn’t long enough to get the job done, so I taped two together. It worked great! I repeated this process for both the front and the back of the skirt.

Once both pieces had been cut I serged the sides together.

I cut an approximately 10 inch slit in the back and serged that edge as well.

I draped the circle over my dress form to make sure it was the right length. It did require a few adjustments. As you can see, the edge closest to the camera is a little long. I trimmed that before adding the ruffle. I think this could have been prevented if I had taken more measurements at the beginning. 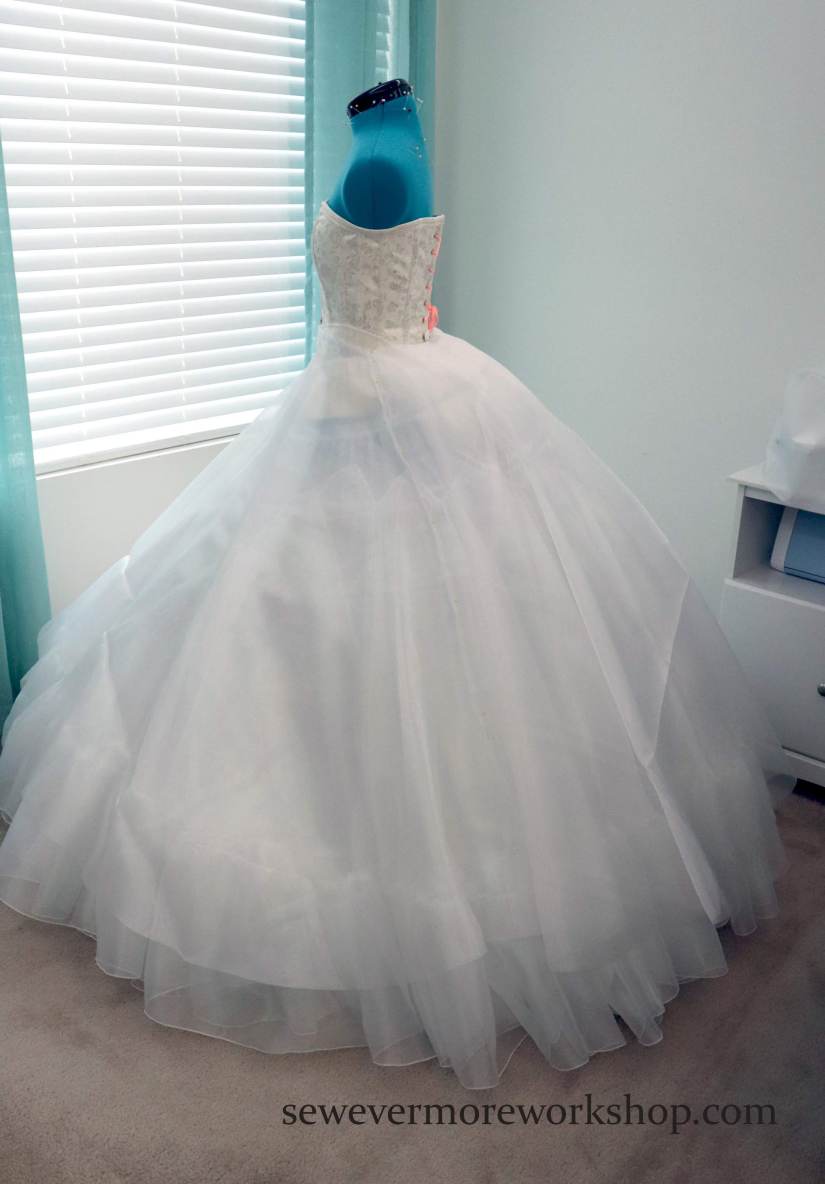 I attached the ruffled edge with a straight stitch and then serged the seam to eliminate bulk.

Here is the Layer 5 petticoat complete!

I think I may want to add a bit more volume to the back to create a smoother shape. The next two layers of the petticoat are simple circle skirts, so they won’t add much to the overall appearance. I do really like the shorter ruffle on this layer. I think it prevented the drop off problem I was having previously.

Overall, I think Layer 5 was a success. We will have to see if I decide to add more godets to  make it even bigger!

I am excited to show you the first in a new series I am working on! The next step in the Belle dress is coming soon, but to tide you over until then here is a quick look at my next idea.

I LOVE going to Disney Parks and I LOVE cosplay, but sadly the two don’t always go together. When I am at the parks I need to be comfortable in order to enjoy myself. Yet, the cosplayer in me wants go in full Disney style. So, here is my solution. Every day clothing that is inspired by Disney characters, parks, movies, etc.

For my first piece in this series I was inspired by Cinderella. I took my favorite work shirt and traced the pattern using pins and craft paper, a trick I learned from a Craftsy class.

The shirt is light and roomy with a lot of drape and super comfortable to wear. I find myself reaching for it most often from my closet. It was my go to selection when I was considering comfortable, yet dressy tops. Since I wanted Cinderella inspired attire, I didn’t want anything too casual. 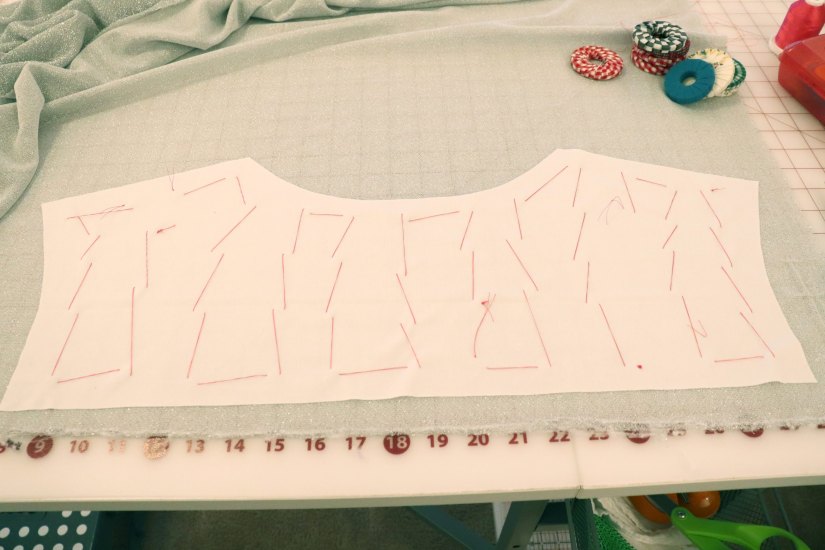 For the top part of the shirt I layered a sparkly silver metallic knit fabric from JoAnn with their affordable jetset knit in white. I basted the pieces together to prevent sliding.

The bottom of the shirt is a basic satin draped with a lace overlay. I finished both with a simple narrow hem. 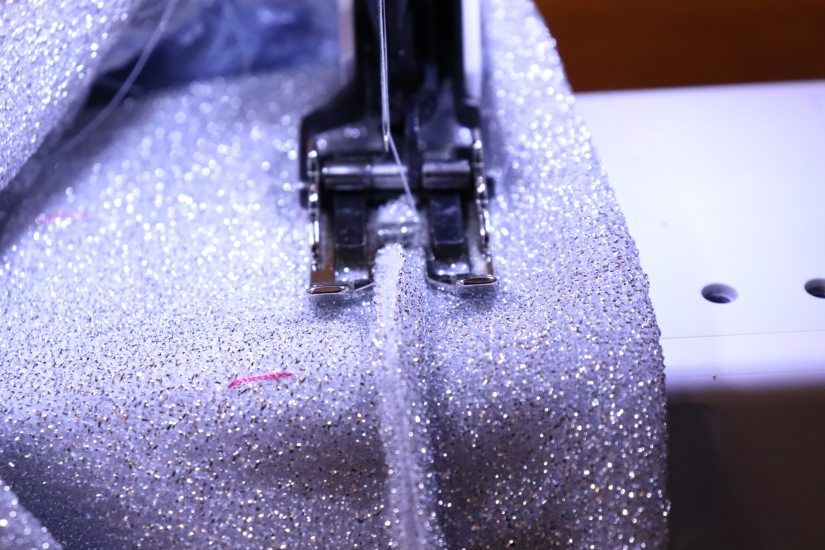 I added cuffs to the sleeves in a single layer of the metallic fabric folded in half and dressed it up with a string of pearls.

Here was my result. 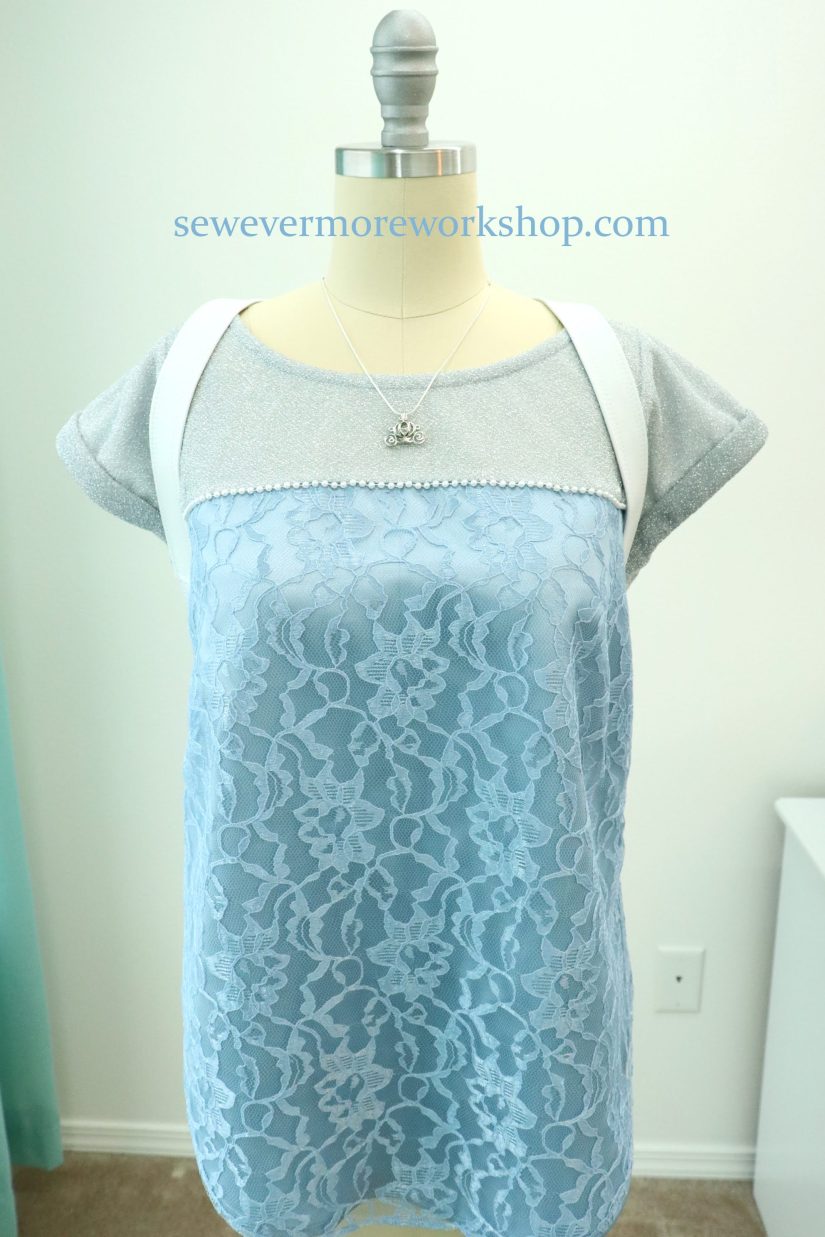 Matched with the shirt is a backpack that I made using coordinating princess fabric. You can read more about the backpack at my crafting website learncreatesew.com. I think both items worked very well together. 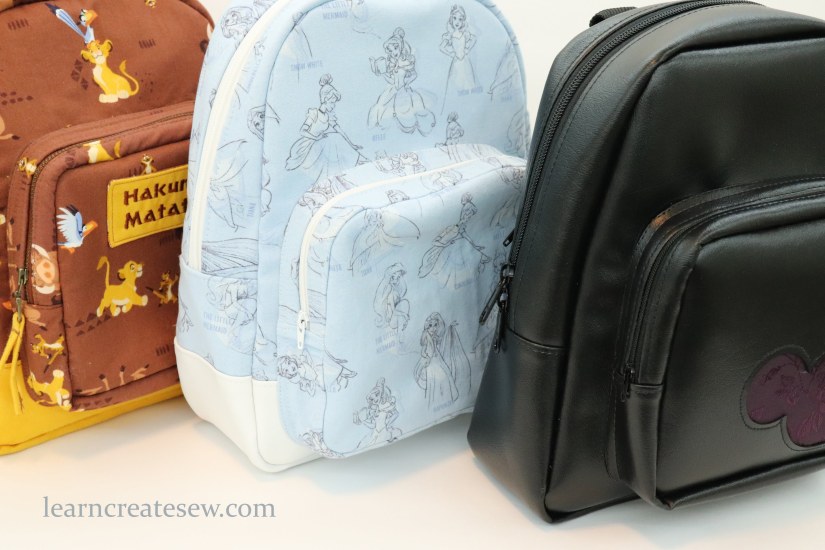 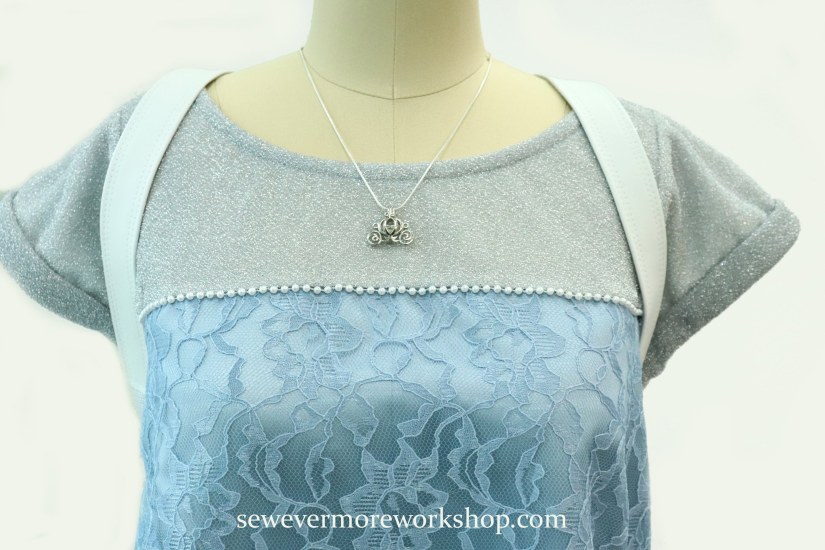 The ensemble was topped with a Cinderella coach necklace I found on ebay.

Although I faced quite a few struggles with fitting and drape, I was pleased overall with the final product. Of course, I am working on a pair of ears to go with it 🙂

I look forward to expanding my collection of casual wear inspired by Disney!